We’d been warned about the thin walls
before we moved in
and for once, rumors were true
that here there would be no secrets
that the walls have ears like Cuba
or Eastern Europe during the Cold War
but it’s not that bad really
and I’m trying to shrug it all off
Voices are muffled just enough
to keep juicy details slightly out of reach
Yes, an occasional spat does break out
between these star-crossed lovers
taking offense and weary of being annoyed
pardon an expletive or two
that do come through loud and clear
and the door slamming
for the right touch of drama
like a perfectly placed exclamation point.
Or raucous hilarity arising out of the blue
like hyenas calling from the savanna
and I think, well, better to laugh than to weep,
but then there is dancing too
or gymnastics
in army boots meaning business
and shouting out a favorite song acapella
to get fired up for the day that awaits them perhaps
and yes, it’s proof that America’s Got Talent,
although that’s often in the eye of the beholder,
as we know,
but then too there’s the rather odd decision
to move furniture in the wee hours
and drop bowling balls or anvils
maybe as proof of gravity
unmistakable punctuation to another moment in their lives
in this humming beehive of far western civilization
where, like it or not, we are all in this together,
nearly rubbing against each other
as we rise and fall         come and go
Then there are those x number of minutes of jagged intensity
of x-rated but unintelligible moans of humans
in the throes of ecstasy
the spirits of aroused hedonists moving and
banging around like pinballs
Gone are the normal, albeit puritanical, restraints of discretion
of that modicum of concern
for who might become aware
since we do not find ourselves on an island in the ocean
No, instead it’s like they want to proclaim to the whole world
how they are conjoined and exploding
and oblivious to everyone and everything else
So there!
I roll with this too
even laugh
quietly though and
turn up my own delicate,
fascinating noise of existence and memories and counting down. 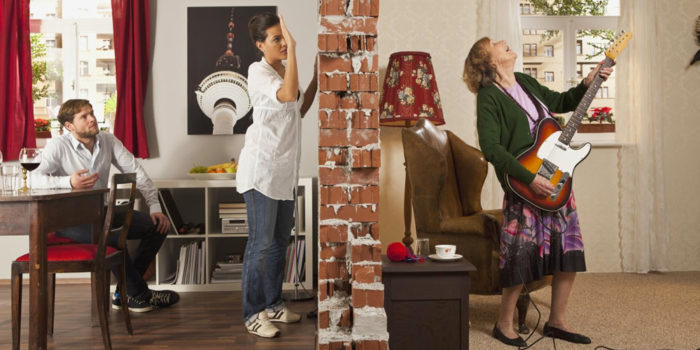